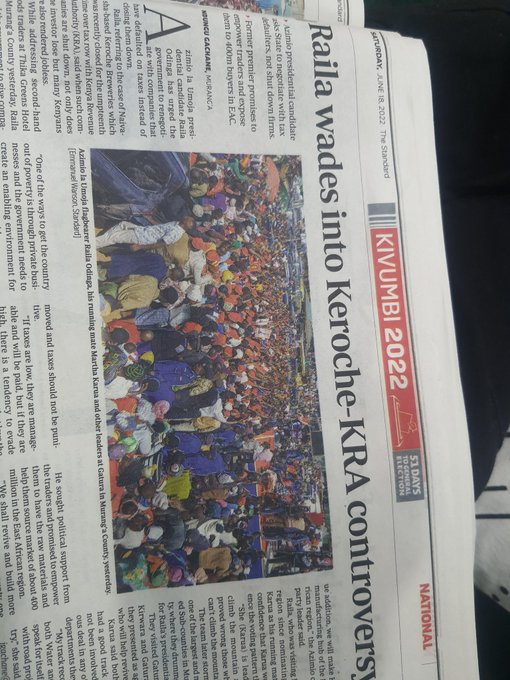 Keroche tax issues are real & not political. Sadly as currently structured (ownership & management), Keroche will never meet its obligations to KRA. The owners need to invite a strategic investor to invest & manage. KRA should facilitate this to save this Kenyan enterprise.
19 Jun

Sam S @SamShollei
It would be obvious now that Sakaja does not have a degree. So why did he abandon his national senatorial job to go for a local managerial governorship job. Jimmy as well took on Raila at ODM, then shifted to Safina. All along he should have been focusing on his qualification.
16 Jun

Sam S @SamShollei
What is it with Muhoozi's middleware. Tight trouser or misbehaving instruments!! twitter.com/mkainerugaba/s…
8 Jun

Sam S @SamShollei
However defeats the more compelling development of textile industry to satisfy the local market and export to bring in foreign exchange. Life is about choices and at some stage we have to decide. Remember the backward integration to cotton production. twitter.com/ckositany/stat…
8 Jun

Sam S @SamShollei
Senator Kindiki most likely UDA will win, what can UDA government really do in the face of the high borrowing & continuation of high expenditure & low revenue. Kenyans are now over taxed. Then agriculture has collapsed, food security a mirage. IMF is back in town- no subsidies.
17 May

Sam S @SamShollei
Senator Kindiki, from beginning Jubilee expenditure budget was greater than revenue by close to a trillion shillings; if Big 4 was implemented the deficit would have been more and borrowing higher and Kenya would be in worse state.
17 May

Sam S @SamShollei
Senator Kindiki, the borrowing of 1st term & need to finish what was started caused all problems of 2nd term. Big 4 would not be done cause of projects of term 1. Big 4 was ill conceived. Relationship with China hinders manufacturing; Galana collapsed. Health ok.
17 May

Sam S @SamShollei
Kalonzos political aspiration for President ended and I guess the drama had to be there. He was so close to the presidency & yet so far. His actions & those of Mudavadi were similar even he thought there would be an earthquake. Bye Kalonzo, bye Mudavadi, bye Wetangula. Goodbye
17 May